Makes sense to me. The problem with chest thumping and pretending that you’re not afraid is how much energy it takes. That’s energy that could be used doing other things…like actually building a better life.

So I’ll admit it.

I’m afraid I’ll fall apart and stop producing at this crazy rate. At the end of the year my life will be the same and I’ll hate myself for it.

I’m even more afraid that I WON”T stop producing. I’ll do an insane amount of work. More in a year than I’ve ever done in three. And nothing will take off and at the end of the year my life will be the same. And I’ll hate myself and fall into despair because of it.

I’m afraid my struggles with working out consistently will continue. That the days I watch what I eat versus those I don’t start getting unbalanced on the scale again, and the weight follows. I’m afraid the most I’ll be able to hope for is maintaining the two years’ of hard fought gains I’ve managed.

I’m even more afraid that I’ll push and push and push beyond anything I thought I could do…and still see 100 lbs extra on the scale. That I’ll crush it at a level that turns heads…and see no results. Or minimal results.

I’m afraid that at 40 it actually is too late for me to do anything to have even a slice of the life I had the potential to have.

I’m even more afraid that it’s not, but I’ll settle. And in the back of my mind I’ll always suspect. Or even worse, I won’t. Which means no hope of course correction before my last day on this earth.

Because I’m always tired already. Because life has broken me so many times. Because struggling against a broken brain and extreme depression is draining. If I could settle AND be happy…how do I not take that Devil’s Deal in lieu or chasing the dreams I have left?

I’m afraid that the depression will come back and someday it won’t leave.

I’m afraid just as I’m getting my feet down and making major strides life is going to hammer me back down again. Sisyphus pushing the boulder, all in jest.

NOTE: As of this writing this actually just happened. Great paying flexible job abruptly ends six weeks ahead of the “worst case scenario schedule” just as my computer dies and another medical bill comes up hammering savings. Because of course they both did. At the same time. Ice on the steep hill, trying to climb on ice.

Because what if instead of being the beginning of great things this was the high tide mark? What if things are about to change so much that if you’re not already at a certain point, it’s too late and you’ll be left behind?

I don’t really believe that, and I think it is more an excuse than anything. But the fear is still there despite the evidence I have that it’s false. More evidence than many others have and yet there is always going to be fear there with the faith.

But that doesn’t mean that changing things can’t screw it up. How often in my life have I just been one year off? I count four or five different times where online changes happened one year before my jump was complete, knocking the box, and my knees, right out from under me.

And I’m not alone. This isn’t unusual.

Nothing scared me more than getting stuck for most my life and thanks to two economic crashes, my own mental illness (stupid brain), and a severe depressive episode (as well as not understanding the concept of opportunity cost) that’s exactly what happened to me.

And naturally, I wasn’t stuck in Tahiti, Isla Mujeres, or some other amazing place I would have been alright with.

There was always an assumption early after the 2008 crash that I’d bounce back nd while I’ve gotten by and even had a few good years on the money side, the rest of my life felt, well, wrecked. There’s no guarantee anything gets better.

No one is coming to save you.

And some people can’t save themselves.

So yeah, I’m afraid, and that’s alright. I’m afraid things could go terribly wrong. And they might. I’m afraid I’ll never reach my most important goals and dreams. And due to things beyond my control, some of them might already be out of reach.

So I’m afraid, but that’s fine. And it’s fine if you’re afraid.

Just no more being a zombie. No more “the safe way out” no more settling for less and trying to convince myself that I’m happy with less.

No more being a zombie.

On brand, on point – join me in overcoming the fear to be zombies on strike. 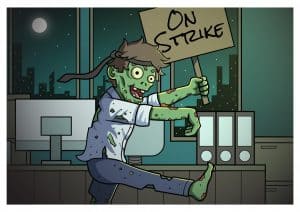 There have never been more options and opportunities for all of us...so why do we feel so trapped? Even those of us who have lived adventurous lives, who have been digital nomads, who have done different things? How could we all be so fooled? This site is all about options. Opportunities. Freedom. We're sick of clickbait headlines that promise freedom then lay out a plan none of us have any chance of executing. Zombies on Strike is about truly LIVING life and seeing that from a hundred angles until we find the one that helps you go on strike so you can set you and your loved ones free - into a better and happier life than you thought possible. Welcome to the picket line, ya'll - we're zombies on strike!